You Are Here: 1966: Foundation of a Faculty of Medicine

1966: Foundation of a Faculty of Medicine 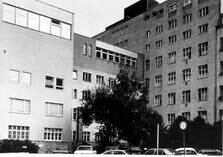 The Faculty of Medicine at RWTH Aachen was founded on June 18, 1966, as Faculty VII at RWTH and as the first faculty of medicine at a university of technology. It originated from the Städtische Krankenanstalten Aachen, which were placed in the custody of the State of NRW as clinical institutions of RWTH Aachen on January 1, 1966. A significant factor for founding a faculty - as an alternative to a medical academy - was the desire for a close link between medicine and technology, e.g. within the framework of the development and intensive expansion of technical institutions for healthcare.

These goals are reflected in the mission statement, which are stated in the Faculty's first structural plan from when the faculty was founded:

From the beginning it was clear that the first two goals would not be accomplished long term in the existing facilities on Goethestraße. The were viewed as a short term solution to be replaced by a new faculty building on the University's expansion area on Hörn.